Bollywood actress Ananya Panday made headlines last month after she was summoned by the Narcotics Control Bureau (NCB) three times for questioning in connection with the Mumbai drugs-on-cruise case. Ever since the actress was away from social media.  On Tuesday (November 16), she marked her first social media presence by posting a small clip on Instagram. In a video, Ananya was seen sitting inside her car with a picturesque view with mountains and rainbow in the background. She captioned the video, “you can’t have a rainbow without a little rain.”

Ananya’s post was a treat for her fans and followers as they were so happy to see their favourite actress. In no time, her post was bombarded with comments. Alia Bhatt‘s sister Shaheen Bhatt dropped a yellow heart and sun behind small cloud emoticon. Bhavna Panday also sent love to her daughter by posting red heart emoticons. Film producer Guneet Monga also commented with heart emojis.

Further, she took to her Instagram Story to congratulate her cousin Alanna Panday, who got engaged to her boyfriend Ivor McCray on Saturday. Posting a picture of Alanna with her engagement ring, Ananya wrote, “@alannapanday @ivor so much love!” 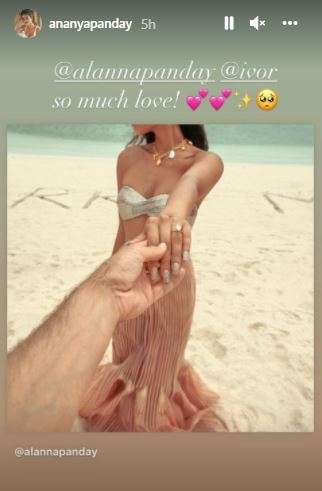 For the unversed, Shah Rukh Khan‘s son Aryan was arrested on October 3. An NCB team busted an alleged drugs party on the Cordelia Cruise ship which was on its way to Goa at mid-sea on October 2. On a related note, Ananya was also asked to join the probe in Aryan’s drug probe earlier this October. Ananya was also seen at the Narcotics Control Bureau office on two occasions as she was questioned. She was accompanied by father Chunky Panday on both days.

Meanwhile, on the professional front, Ananya Panday will be next seen in Shakun Batra’s directorial untitled film that also stars Deepika Padukone and Siddhant Chaturvedi. She will also be seen in ‘Liger’ along with Vijay Devakonda and boxing legend Mike Tyson.

Salman Khan: As actors, we want to grow and get inspired by the characters we play | Hindi Movie News