Skip to content
Akshay Kumar and Katrina Kaif’s much-awaited song ‘Tip Tip Barsa Pani’ from ‘Sooryavanshi’ was released after the film got released recently. In no time, netizens started comparing it with the original song that featured Raveena Tandon and Akshay in the film ‘Mohra’. Raveena is seen liking tweets that have praised her version of the song on Twitter.

On Saturday, the makers of ‘Sooryavanshi’ treated fans with the song after the film got a fabulous response at the box office. In the video, Katrina and Akshay are seen setting the screens on fire. The actress is also seen recreating a few of Raveena’s dance steps from the original song. Soon after the music video was released, netizens had mixed reactions to it.

There were few who were seen appreciating Katrina’s performance while there were some who think that it didn’t the original version. One of the fans tweeted, “Original Tip Tip Barsa Pani is something else, that too in early 90s” while the other tweet read, “Raveena Tandon in Mohra(1994) Dir.Rajiv Rai.” Both the tweets were liked by Raveena. Have a look: 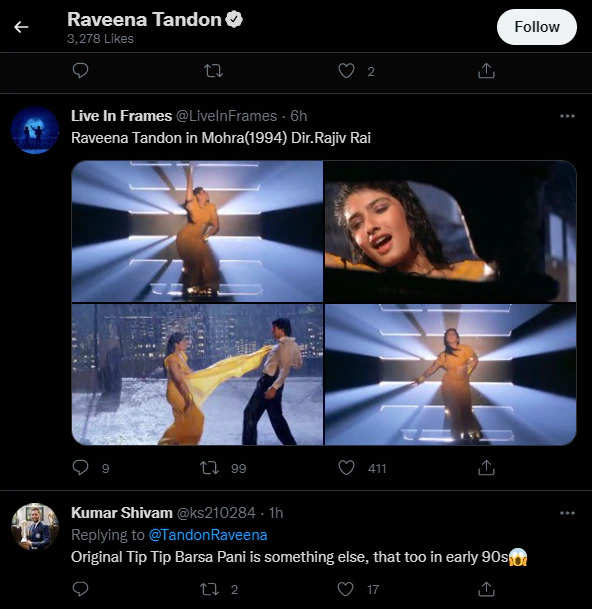 The new song is recreated by Udit Narayan and Alka Yagnik while it has been remixed by Tanishk Bagchi.

Earlier in 2019, Akshay had announced that the song will be remade for his film. He had tweeted, “I would’ve definitely been disappointed if any other actor would’ve recreated Tip Tip Barsa Paani, a song which has been synonymous with me & my career & I can’t thank Ratan Jain ji enough. At times like these you realize, we may have come a long way but we also go back a long way.”

The Rohit Shetty directorial minted Rs.26.50 crore at the box office on its first day.

From firms listening in Delhi hotel to a list of 96 contacts, what Michel told ED