Sisterhood is bliss and the bond that B’town’s sisters Alia Bhatt and Shaheen Bhatt share is evident through their ‘sibling love’ dedicated social media posts. On Thursday, Shaheen shared a special appreciation post for her darling sister-actor Alia Bhatt on her Instagram story. She shared a beautiful snap of the ‘Raazi’ actor which shows her sitting on a chair at a beach. Alia can be seen wearing a lime green top paired with jeans. A breeze blows the 28-year-old actor’s hair as she flashes her million-dollar smile while posing for the lens.

Shaheen captioned the snap as, “Just an Alia appreciation post”. 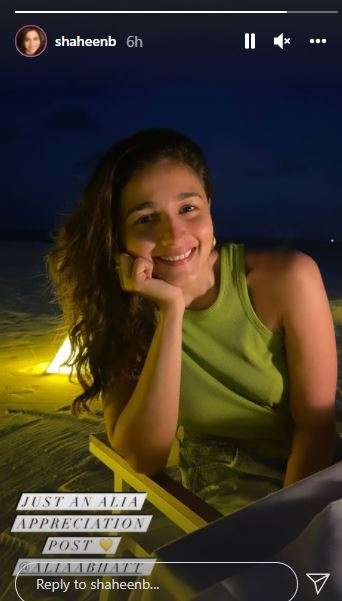 This is not the first time that Shaheen has featured Alia in her social media post. The sisters often express their love for each other by sharing adorable pictures and videos with each other on their digital platforms.

Meanwhile, on the film front, Alia will be seen in ‘RRR.’ Set in pre-independence India, the film is a fictional take on the younger days of celebrated freedom fighters, Komaram Bheem and Alluri Seetharama Raju, portrayed by Jr. NTR and Ram Charan. The project is helmed by SS Rajamouli, who was also the mastermind behind the record-breaking ‘Baahubali’ series.

Next, she has ‘Brahmastra.’ Other than Alia, Brahmastra also stars Ranbir Kapoor, Amitabh Bachchan, Dimple Kapadia, Nagarjuna and Mouni Roy. The film also has a cameo by Shah Rukh Khan who will be seen as a scientist. In the film, Ranbir Kapoor will be seen as Shiva while Alia Bhatt plays his love interest Isha who supports him in his quest for the all-powerful Brahmastra. The film is scheduled to release on 4th December this year.